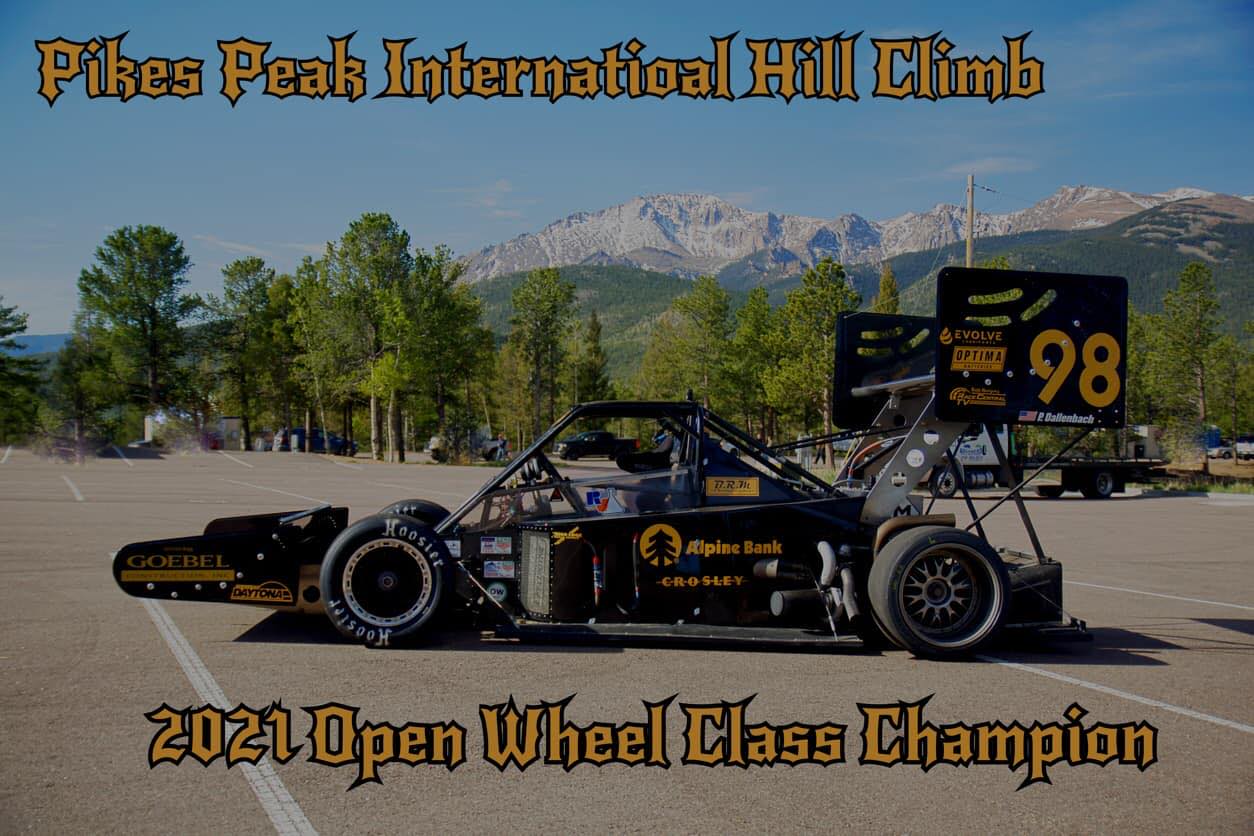 Weather was one of the biggest concerns as the week progressed; radar showed the potential for snow and rain on race day, making for tough choices for all teams to have to consider for set up. Dallenbach made the call to do a quick shake down session in the car at Pikes Peak International Raceway Saturday before the race to test a rain set up to be prepared. When race officials made the call to shorten the course, it was left up to the teams to decide on rain tires or slick tires for dry conditions. At that time the course was dry and Dallenbach was comfortable making the choice of slick tires.
After a minor 1 hour weather delay, the morning kicked off with the Exhibition class and the Porsche Pikes Peak Trophy by Yokohama class, hopefully allowing the road to warm up some. Dallenbach qualified 1st in his class, which would make him 14th off the line. “The car was great, the road was pretty slick with the cold weather” stated Dallenbach. “It was loose at times, but was drive-able.”
Prior to Dallenbach’s run up the mountain dense fog had rolled in just below the new finish line. “I hit some heavy fog up top that I believe cost me 2nd overall” added Dallenbach. “ At the end of the day I’m super happy that this old car and part time racer can still get it done.”
When asked about if he plans to return to Pikes Peak, Dallenbach stated “Next year is the 100th running and will be my last Pikes Peak International Hill Climb, that is unless someone can make it financially worth it.”
Dallenbach’s appearance this year at the Pikes Peak International Hill Climb is made possible through his sponsors; Alpine Banks, Crosley Brands, Goebel Construction, Rock Valley Oil & Chemical (RVO), Hoosier Racing Tires, Evolve Lubricants, BRM Americas, Trust Me Vodka, Sign Edge, Race Central Media, and Project Daytona. “We are fortunate to have sponsors who are so generous and into racing, actively participating in our race preparation,” remarks Dallenbach.
About the Race - The Pikes Peak International Hill Climb is the second oldest motor sports race in America - Only the Indianapolis 500 is older - and a longstanding tradition in Colorado Springs and the Pikes Peak Region. First competed in 1916, this year marks the 99th running of the "Race to the Clouds." The running of the race will take place on Sunday, June 27th with race related events during the preceding week. The infamous race is run on a 12.42 mile course with 156 turns that begins at 9,390 feet and finish at the 14,110 foot summit of America’s Mountain – where America the Beautiful was penned - Pikes Peak! As the gutsy drivers climb toward the summit, the thin air slows reflexes and saps physical muscle strength. The thin air - two miles above sea level - also robs engines of 30% of their power at the summit. Competitors and vehicles must be in top shape simply to finish...let alone win!
The race can still be seen on the official Mobil 1 YouTube. There is no other racecourse in the world like the Pikes Peak International Hill Climb. It attracts race crews that are willing to spend several hundred thousand dollars and months of preparation to compete for the right to be the King of the Mountain.
Zach T2021-06-29T21:17:31+00:00